Getting meals into the freezer ready for baby...

I've got a baby due in about 5 weeks time. The nesting instinct is pretty strong right now and today was all about getting food made or prepped for when our newborn arrives. I've been really interested in these amazing bloggers who seem to have taken over Pinterest with their freezer meals - like making 46 meals in 4 hours for $100 or whatever. I thought I'd give it a bit of a try, although with my own spin, and taking into account the amount of time I can realistically spend on my feet in the kitchen right now is a bit limited. So, I ended up making 5 different recipes which will yield about 26 meals. It took me about 2 and a half hours but if you're not almost 9 months pregnant, it'd take you a lot less I'm sure. I made or prepared:

I've linked to the recipes I followed above, but as usual I've made a couple of changes, which I'll outline here. 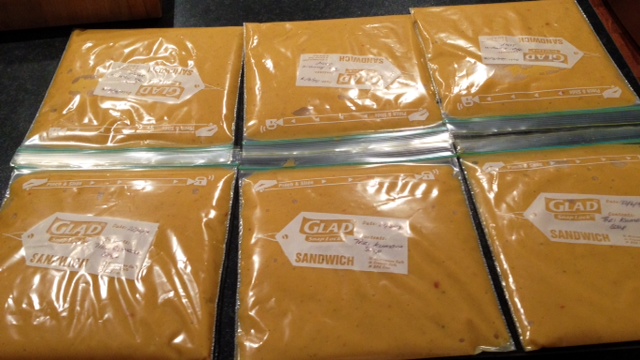 The thai soup is an Annabel Langbein recipe which calls for pumpkin but I've modified it after making it several times and prefer it with orange kumara.

The meatloaf I made following the recommended changes other cooks have outlined in the reviews - added Worcestershire sauce, seasoned the mixture well, lined the tin with foil so it doesn't stick and doubled the ketchup topping. I've made this recipe a couple of times now and it's really tasty.

The Moroccan lamb stew is my personal recipe. I followed it exactly as written.

I followed the Mexican chicken recipe as written except for the lime juice, as I didn't have any. I also added a jar of chilli beans and some frozen corn. I've made this recipe a few times and found adding the lime juice just before serving really lifts the flavour and freshness. I've made tacos, burritos, burrito bowls and enchiladas out of this recipe, it's a great base. Once shredded the chicken really goes a long way. It stays moist once shredded because of the lovely sauce it's cooked in.

By the time I got to the Teriyaki chicken I was flagging and feeling lazy. I simply sliced the chicken breasts diagonally and poured some bottled Teriyaki marinade (I used Kikkoman) over them, with a few crushed garlic cloves and a tablespoon of brown sugar. 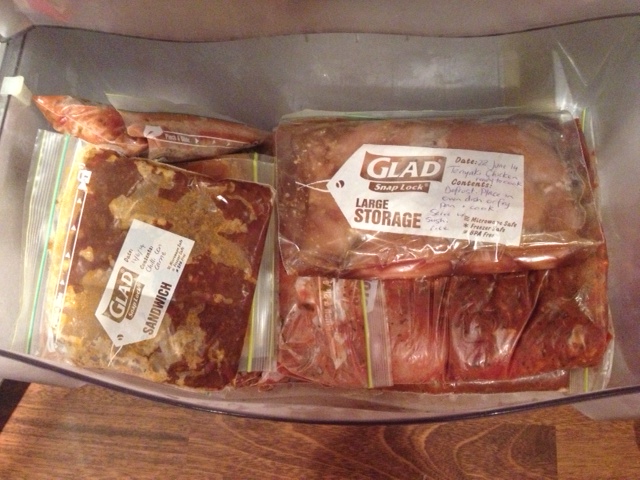 The meatloaf and the soup I cooked and portioned into clearly labelled freezer bags. The others I just prepped all veges and meat, added all other ingredients and popped into clearly labelled freezer bags ready to be cooked in the slow cooker at a later date, the idea being you'd take one out the night before to defrost then pop into the slow cooker in the morning. I used 3 large skinless chicken breasts for the Mexican chicken which once cooked and shredded should do at least 6 adult portions, more likely 8. I used 2 large skinless chicken breasts for the teriyaki chicken which should feed 3 or 4 adults. I bought a butterflied leg of lamb for the Moroccan lamb stew that was pretty close to a kilogram, but was quite fatty so after I trimed all the unnecessary fat off it probably ended up being about 800gm. I have laid all the freezer bags flat in my freezer, so they are easily stackable and take up less space once frozen solid. Another Pinterest trick.

So now I have about 35 meals all ready to go in the freezer, as I'd been freezing leftovers for the past few weeks. I'm hoping once maternity leave starts in another fortnight that I will still have the energy to get some baking done. I'm particularly keen to get a few dozen peach muffins made as well as a couple of lemon blueberry yogurt cakes as I know these recipes both bake and freeze well. The only other limitation right now is the rather small size of my freezer... oh well! 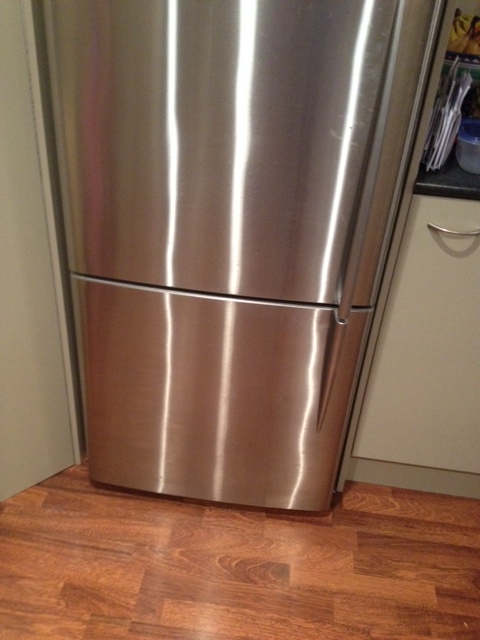 Here's hoping that these meals see us through the first few hazy weeks of baby's life... fingers crossed anyway.
Posted by Unknown at 18:08